Mac OS ToolBar on All Screens

If you are wondering how to get your Mac OS toolbar and your dock to display on multiple monitors (in my case three of them), then you will find the answer here! When got my new Mac Studio up and running with three monitors, I was surprised to see that there was only one toolbar and one dock which were on the main monitor.  Yet on my old Mac mini which was set up with two displays, the toolbar and dock most definitely appeared on both monitors. Was it because I had three monitors now? No.

I thought that the answer to this must be in the display settings. That’s where you set up your monitor configuration (in the Advanced Tab) and that’s where you can move the toolbar from one monitor to another (which, of course, isn’t helpful for what we’re trying to do here).  There was no joy there and for awhile I tried to live with one toolbar and one dock.

But if you’re like me and you run a number of browser windows (each with at least 50 tabs open to further complicate life) and you have an email app running, Affinity Photo, Evernote and God knows what other apps, having one toolbar, in particular and only one dock is horribly inefficient. For one thing, if you need a command for an application in the left monitor and the toolbar is in the centre monitor, you have to pan across from the left monitor the toolbar on the centre monitor as opposed to just panning straight up to the top of the monitor you are working on.  Only one dock is slightly less of an issue but I found that annoying as well. I was used to just going to the dock on the monitor I happened to be on.

And of course I searched via Google for a solution to this problem and was surprised when I couldn’t find one. Hence, the reason for this post! And without further adieu, if you like your monitors set up such that each one of them has a toolbar and a dock, here’s what you have to do:

2. Type in ‘Desktop” in the search tool: 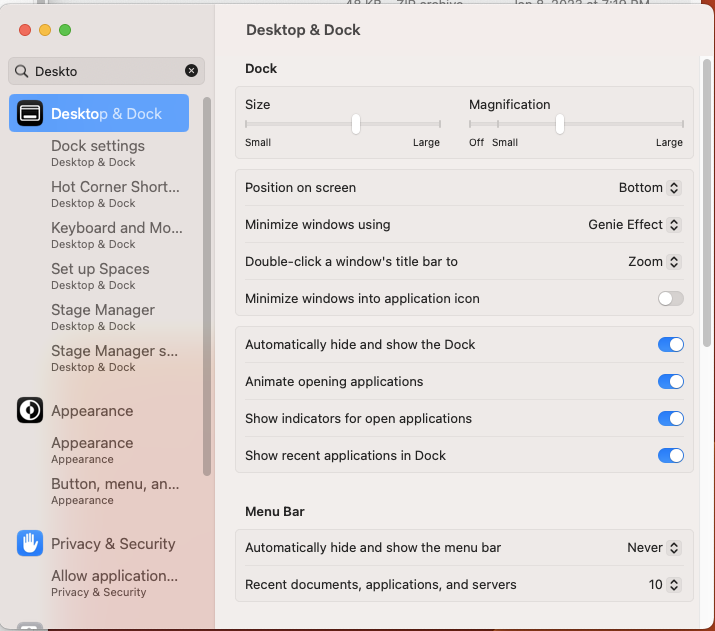 3. Scroll down to the bottom until you see “Mission Control” and then turn on the switch for “Displays have separate spaces”

That’s it! That’s the magic.

This is on Mac OS Ventura 13.0, by the way. It’s possible older OS’s handle this a bit differently.

I realize as well that this may not be the way some people want to set up their desktops. Someone who wants to extend an application across multiple screens, for example, won’t want this. And there are other workflows where this may not be the best option. But, it’s certainly the one I want, and I’m happy to have my multiple toolbars and docks back!

Below is a photo of my three screens. The centre one is the main screen. I’ve got the mouse cursor on the dock on the left screen. And you can probably make out the toolbars that are running across all three screens. In the background you can see one of my original Apple Homepods that I pair for some background music. The Mac Studio is on the desktop. I’m using a split keyboard made by Kinesis called Freestyle 2 for Mac, along with a Kinesis numeric keypad. The left and centre monitors are LG 27 inch 4K monitors on Ergo Stands and the right one is an LG UltraFine monitor, just in case anyone is interested. 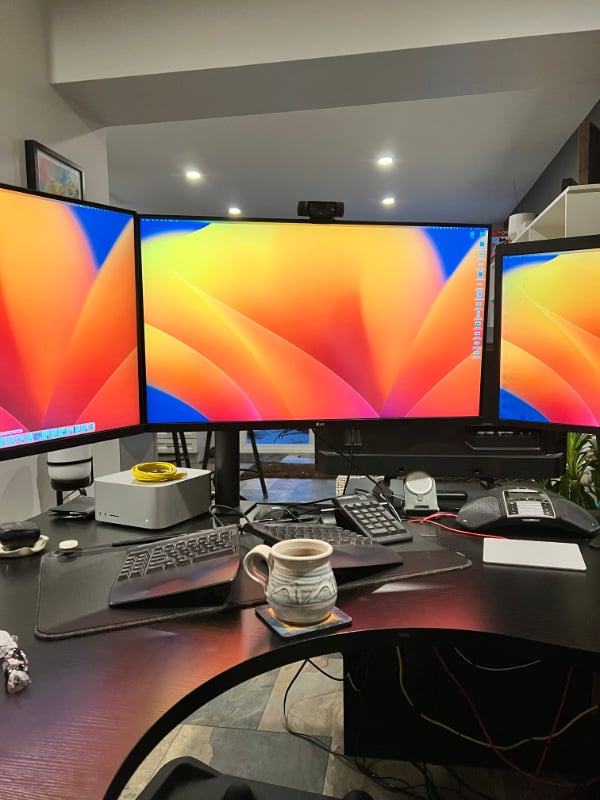